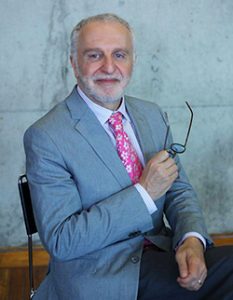 Edward Leaman – A Biography
Edward was born in London, England. He holds BA and MA degrees from Cambridge University in American history. Trained as a merchant in London in the late seventies, he developed his passion for the customer as he explored his career in Europe and Japan, in the lifestyle businesses of fashion, interiors and entertainment, as a designer, merchandiser and marketer.

Edward came to the United States in 1986 to run an apparel company after six years in Japan. In 1988, he opened his own consulting company with a partner, to connect global retailers with new opportunities in licensing, franchising, cross-border expansion and brand development. Clients included Gap, Joe Boxer, Nike, The Body Shop, Marks & Spencer, Giorgio Armani and many Japanese retailers.

From 1994 until 1998 he was Executive Vice President of California Closets directing and driving the growth of that brand, and upon its acquisition took on on a bigger role in brand building across a whole portfolio of property service companies.

In 2001 he founded Growers and Nomads (www.thegnstudio.com), which drives the brand building for a diverse group of brands, direct to consumer, business to business and non-profit, speaking to the modern customer. He is still the working CEO and is based in Marin County, CA.

Taking a customer’s point-of-view, Edward’s reputation and work, has been built on the ability to broaden market share, company growth and shareholder value by aligning product, customer experience, and marketing mix around core, emotional customer attitudes and driving holistic execution of operational platforms relentlessly. He sees brands as needing to be sustainable relationship enterprises in which the anchors of the brand are the beliefs and values at the core of its idea and connected to everyone who touches them. His definition of brand is promise, delivered and measured. In addition to his professional work, from 1995-2005, Edward held the position of Chair and Professor of Design (fashion) at the California College of the Arts (CCA), and he has taught at the Saint Martins School of Art in London, in the Green MBA program at Dominican University, California, and is at present teaching at Stanford University in California. He speaks often at conferences on the subject of building a brand.